Previous custodians at Kirklands had horses, it was on Louisa’s birthday and Christmas list for many years. Initially Peter strimmed the paddock. Some years the hogweed and the nettles would be 10 feet tall, but gradually the field was cultivated.  The cardboard and mulch system was used, then trees planted like the white bark birch trees (Betula betula jacquemontii snow queen), a collection of sorbus with different colour berries and a corkscrew hazel. Then slowly filled in with shrubs and rhododendrons.  Underneath the smaller plants were added; snowdrops in spring, hellebores, erythronium, and a myriad of other things to spread the season. In autumn, the Sorbus berries shine out and the peeling bark of the Chinese Birch.

From the end of the Bluebell Walk, you can either continue up the bank or take the right path down over the blue bridge where you can either walk up onto the woodland path along the far side of the stream through naturally regenerating ancient woodland or across the red bridge to the bog garden.

The red bridge was replaced in the winter of 2019 as it could be assembled in the garage out of the cold.  It was very much a team effort with Louisa, her husband Tony, and the grandchildren, Jacob and Cameron building the bridge and then carrying it down into place. The blue bridge is from May 2021

Next to the red bridge is the area in front of an old well; the archaeologist tells us it’s a Victorian folly, but we prefer the story heard when first here that it was an ancient well for village people to draw water.

This area was a mass of nettles and scrub willow.  A retired miner, Benny McLaughlin helped dig out some of the roots.  Peter and he thoroughly enjoyed sitting down by the stream/burn and resolving the problems of the world and listen to the stream.  When Benny died in 1991, Peter built the raised area by the stream and some of the raised beds, where he and Gill could sit and contemplate the peace and quiet of Saline burn. 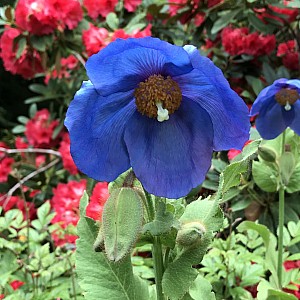 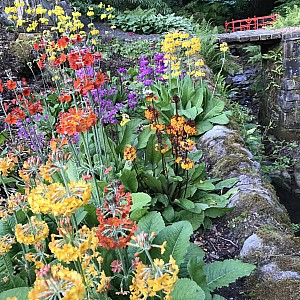 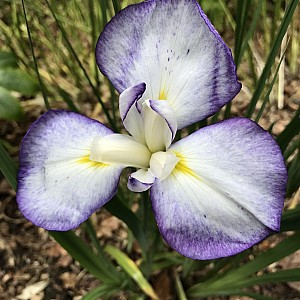 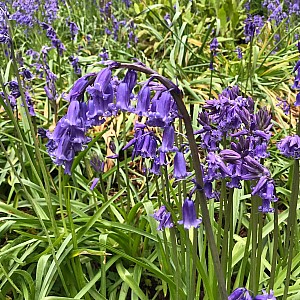 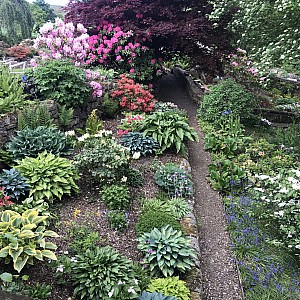 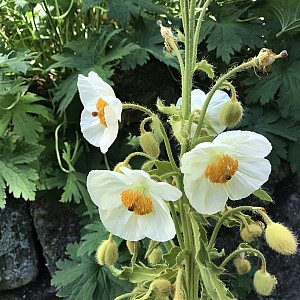 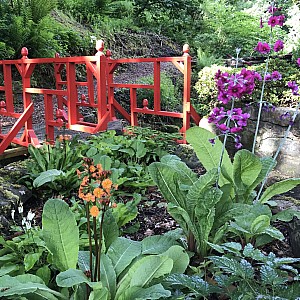 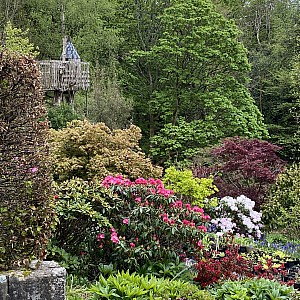 The bog garden here at Kirkland’s is unique because it’s on a slope. There are several springs on this hillside, which feed the plants. In early spring, there a white Marsh Marigold followed by the yellow Marsh Marigold (Caltha palustris), ligularias and darmera peltata, which comes up Triffid-like in May, and then the leaves emerge in.  Recently Candelabra primulas and trilliums have been added. By the well there is osmunda regalis; the Royal Fern which loves to have its feet in water.

The well should be cleaned out annually.  Many years ago, that job fell to their son Mark until he grew up and became too big.  Now the Grandchildren have the job.  The well is not deep, about 1 metre!  We’re not sure the grandchildren like the job but they received waders for Christmas to make it easier!

Many areas of the garden that Kirkland’s are on a slope, which adds a certain challenge to gardeners, but it also makes it particularly beautiful once the garden is a little more established. We used to mow the grass and then cover with 10 layers of newspaper and four inches of shredding in order to kill all the grass and the weeds. Gradually, as each year goes by, we plant through it. On the bank there are rhododendrons and trilliums, and of course the bluebells have spread to this area. As years go by, we try to improve the detail of the planting, so we get better Trilliums, better pulmonarias, new ferns, like Polystichum munitum, the Western Sword Fern gradually improving the planting.

The hosta bed is an area of much improved planting, Peter has indulged his passion for hostas. In the summer there are 30 different hostas in this area. He walks besides the bed every morning, talks to them and hopefully begins to remember the different names and the different styles!

Perhaps his favourite, at the moment, is Jade Cascade, which is an absolute triffid of a hosta that grows over three feet tall and has fantastic flower spikes (This year it might be Empress Wu). Equally good is Mouse Ears, which is a little tiny blue hosta and the blue leaf hosters are almost slug resistant. In between them are trilliums and meconopsis.  The attractive meconopsis Baileyi Alba sets lots of seed each year to propagate in the plant sales area.

This area between the hosta bed and the wall to the walled garden was probably the original dumping area for household rubbish before modern bin collections. Originally planted with crocosmia and carex and ligularia but they were too invasive, so it took several years to clear it with the newspaper and mulch technique, then some further years to dig up the crocosmia bulbs.  Crocosmia is extremely difficult to eradicate. It has been replanted with a few rhododendrons and hellebores, candelabra primulas and meconopsis to improve the detail of the planting. Many of the walls build in the 1970s need attention; sometimes the list is endless. 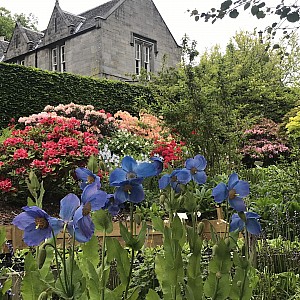 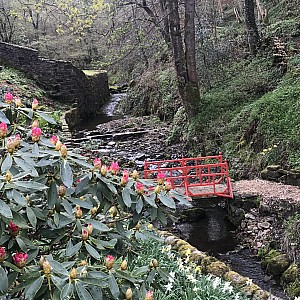 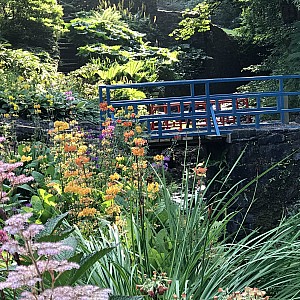 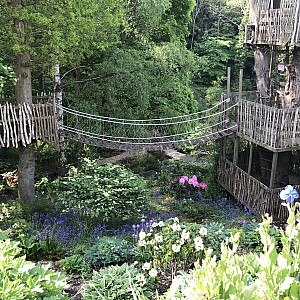 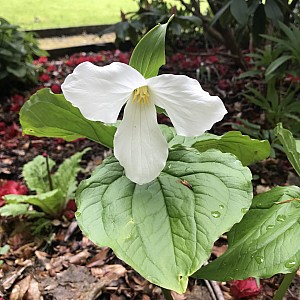 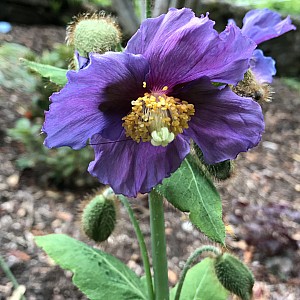 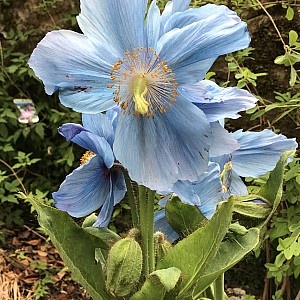